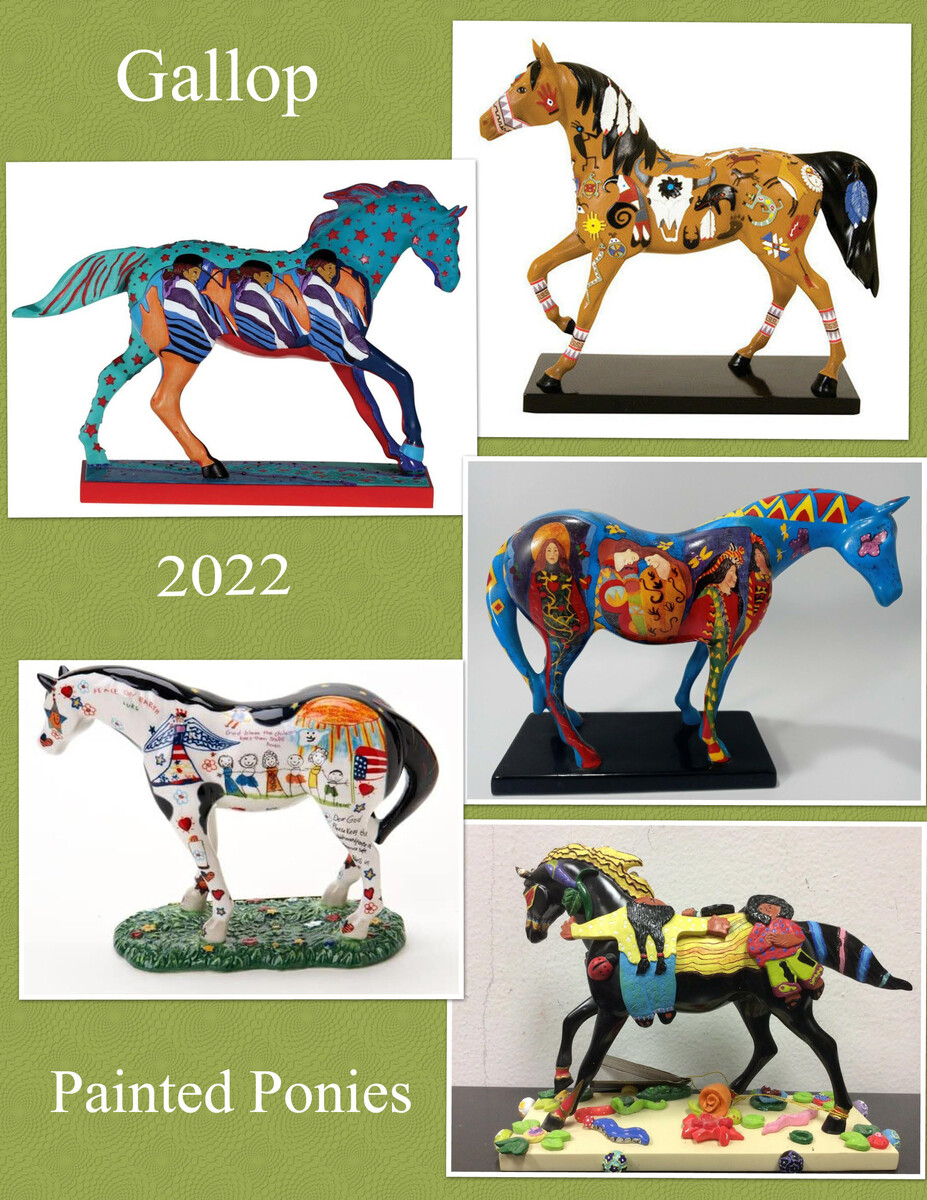 Back by popular demand is our Painted Pony Package! For those of you who follow and collect 'Trails of the Painted Ponies', you know the value of this package! Generally these ponies run from $40 to $1,500+ (individually) if wanting to purchase one. They can go higher than that if retired, and/or signed by the artist, becoming collector's items worth hundreds. Each figurine is inspired by an original Painted Pony artwork, has been crafted with an exquisite attention to detail, and has received "creative approval" from the artist. Twelve new designs are released every six months, and at least once a year, a certain number of figurines are "retired." Each is sequentially numbered and is accompanied by a "story tag" which tells the tale of the Pony, and provides information about the artist.

Pony #1 - CABALLITO PONY - RETIRED AND IS GETTING HARDER TO FIND. Monument Valley, Spider Rock and Enchanted Mesa are names that evoke an aura of mystery and legends. Storied sites in the American Southwest, they also shape the dramatic backgrounds for the culturally rich imagery found in the paintings. Using bold color, striking forms, dynamic composition, and the iconic faces that have distinguished the artist work for years, Pena has created, with his Pony, a tribute to the horses he has known, past and present.

Pony #2 - CHILDREN'S PRAYER PONY There could be no more important messengers of peace than children of many faiths, from all around the world. Their heartfelt prayers for compassion and caring remind us that sometimes, the biggest gifts come in the smallest packages. "Children's Prayers for the World" is a tribute to those small voices that can be heard in the darkness, all around the world. They quietly remind us how important it is to love and respect each other.

Pony #3 - TOPP WIE-TOU HORSE Growing up on a Colorado horse ranch across the valley from her Cherokee grandfather, this artist was immersed at an early age in both Indian art and culture and the riding life. Painting horses and Indian symbols on leather helped pay for her college tuition. It also inspired her to create a Pony whose power lies in the graphically creative arrangement of assorted spiritual symbols. She wanted to include the Spirits that guide and protect us, and everyone the artist painted has, good medicine.

Pony #4 - CHILDREN OF THE GARDEN HORSE This delightful creation by a "tile artist" who designs handmade tiles tells a story of children racing across a magical garden on the back of a magical horse. A place where in the artist's words, "For a magical moment the real world was not allowed to come in." On the original pony, the children, bugs and flowers were all formed in clay and fired for hardness before they were hand painted.

Pony #5 - ON COMMON GROUND The unity and harmony of the feminine spirit resounded in the vibrant art of California-raised Patricia Wyatt. As with her paintings, her pony tells a story that speaks to the timeless themes of companionship and the collective power, wisdom and beauty of women around the world. Animals and lush flowering plants surrounded the figure on the artist's Pony, emblems of the natural world that pay tribute to the Earth, whose mysterious power awakens us all to life and connects all things.

Dear Interested Bidder:
Thank you for having an interest in one or more of our stallion services donated. Should you want to pre-bid, fill out the form below and place your bid. Enter your credit card number or should you chose, print this form out, enclose a check and return to our Gallop Annual Charities Auction address as soon as possible. Should you want to bid on more than one horse, as a first, second, or third choice ... indicated in the "special notes" box listed below, that this particular stallion is your 1st, 2nd, or 3rd choice. Please understand that this information and form below applies to "pre bidding only." Internet bids will be taken during the actual auction through live streaming and available 1-800 phone lines posted the day of the event. You can also reach us at: 509-990-4167.
2022 Non-Service Auction Items Listed
SHARE:
Previous

The Resort at Paws Up in Montana ~ Five-Star, All Inclusive, Vacation Package. Three day, Two-night complimentary stay in an exquisitely Luxury Meadow Home. Includes complimentary Breakfast, Lunch and Dinner as well as one half-day activity for two guest.